The two major state parties AIADMK (All India Anna Dravida Munnetra
Kazhagam) & DMK (Dravida Munnetra Kazhagam) and the two national parties
INC (Indian National Congress) and BJP (Bharatiya Janata Party) are
taken into consideration in the “Vote share”/“Vote bank” line chart
of Tamil Nadu. Apart from the above four parties, Pattali Makkal
Katchi (PMK) is having a continuous vote record of 5% to 6% in Tamil
Nadu from the year 1991.

INC was split into two different parties viz., INC(I) & INC(U) for the
1980 election and we have considered INC(I) as INC in our analysis.

AIADMK was split into three different parties viz., AIADMK, ADK(JL) &
ADK(JR) for the 1989 election. We have removed the “1989 AIADMK values”
from our analysis.

The below bar chart is a comparison of Vote bank for above said four
major parties in Tamil Nadu.

After the 1967 election, the vote bank of INC is less compared to the other two major state parties, but they hold a considerable vote bank in Tamil Nadu.

Except for the 1996 election, AIADMK holds major vote banks in all elections from 1977.

There was a downward movement for DMK vote banks after 1996 election, but they had a good vote share in the 2016 election.

The vote bank of BJP is very less and it is growing slowly. 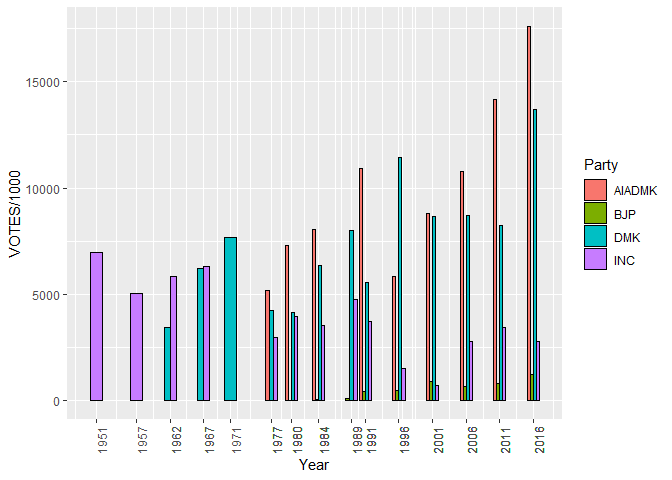 The below bar chart gives the details of winning seats for the four
major parties in Tamil Nadu. 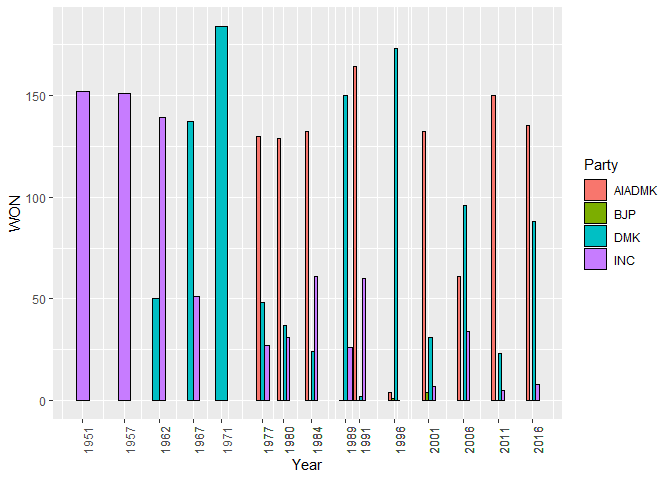 Before the existence of state parties, INC was the only party in power
and they had a strong vote bank (5 to 6 crore) in Tamil Nadu from the
year 1951 to 1967. INC could not able to contest in 1971 election, due
to the major split occurred in 1969. After 1977 the vote bank of INC in
Tamil Nadu is declining or not growing.

The vote bank of BJP in Tamil Nadu is very less, but they are
continuously growing in a steady state of around 30% E-YoY
approximately.

Candidates from DMK used to contest the election even before the 1962
election but without a party name & symbol. The year 1962 was a great
start for DMK and in the next election (1967) itself, they came into
power and that’s an end for all national parties in Tamil Nadu. In the
history of elections, DMK had three major drops in vote bank,

It was a great start for AIADMK when MG Ramachandran started his own
party and in the very first election they came into power. And AIADMK
got to hold for three consecutive elections (1977, 1980, 1984). In the
history of elections, AIADMK had two major drops in vote bank, 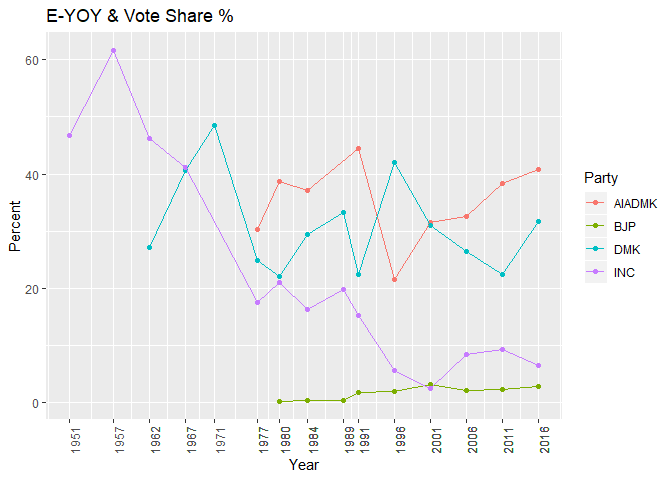 Change in votes for AIADMK is stable compared to all other parties. 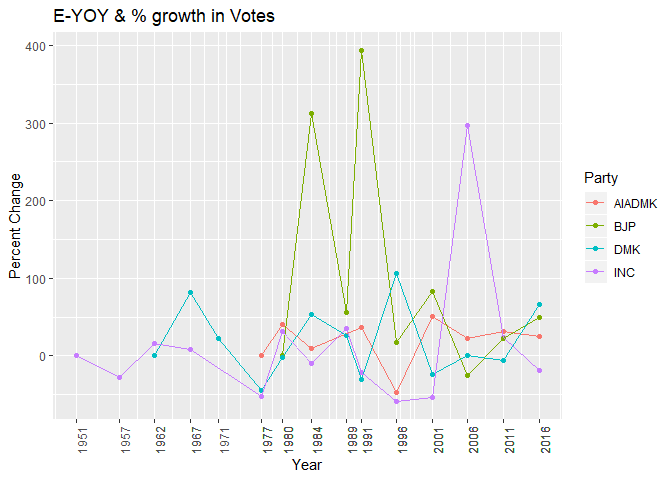